Ahh, those lazy, hazy, crazy days of summer!  What a summer it has been!  Now seems like a perfect time for an update on the goings-on at Scarborough’s fantastic beaches.  Part 1 of our beach report follows.

And perhaps surprisingly, this is also a perfect time to highlight the school budget.  How can that be, you may well ask?  It’s the middle of the summer and the planning for next year’s school budget won’t start for months.  No one is paying attention to the school budget.  And that, friends, is the fatal flaw.  Please read on and discover why these dog days of summer are in fact the most critical time for the school budget.

Higgins Beach where the livin’ is easy… and heavily-policed

By 6am, the prime spots at Higgins have been staked out for the day.

As far as police presence is concerned, Higgins Beach must be the safest place in all of Scarborough.  From about 5am until 10pm, you’ll almost always find one of the men or women in blue on site at Higgins.  Sometimes two of them and, now and then, even three officers.  Granted, they’re not all fully decked-out officers in blue-lighted vehicles, but they’re all hooked into the police command center back on Route 1.

It appears that the Higgins Beach neighborhood is even better protected than Prouts Neck.  And the good folks down there at the end of Black Point Road actually pay for a summer police detail.

So what accounts for this heavy police presence at Higgins?  We don’t know for sure, but here’s our guess.  As you may recall, last year’s Higgins neighborhood brouhaha concerned those darned surfers who allegedly (1) woke people up early in the morning slamming their car/van doors, (2) threatened public decency by changing into and out of their wetsuits shielded only by a towel and (3) wantonly urinated all over the place. 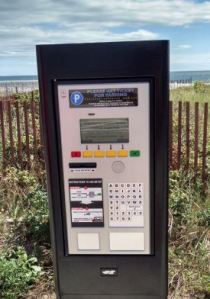 The solution to this was the installation of the Town’s first ever parking meter.  It doesn’t cost anything to park (currently), but you need to punch in your license plate number, print out a ticket (which has the time and date on it) and place it on your dashboard.  Then a parking officer can check the time on the ticket and enforce the one-hour limit  on Bayview Avenue parking.

Unfortunately for the anti-fun crowd that led last summer’s campaign against the surfers, the parking meter solution hasn’t been fully effective.   Many surfers continue to use the metered Bayview Avenue spaces while adhering to the one-hour metered limit.  So look for a new effort next year to do away with the parking spaces on Bayview Avenue.  Or some other method of eliminating surfing altogether.  Watch the Ordinance Committee to see what approach the group trying to privatize Higgins Beach will try next.

By the way, the anti-fun crowd continues its relentless war on dogs at Higgins.  Every day – and timed with the tides — the beach vigilantes set up and remove an ugly string of signs along the no-dogs line at the beach, spoiling the view and reminding everyone that fun has its limits.  And if you happen to run afoul of one of the beach rules, one of the vigilantes will let you know in no uncertain terms.  Ambassadors of good will they are not.

Speaking of running “a-fowl” of the beach vigilantes, this delicious item just in by way of Facebook:  A woman has recently been spotted walking her pet chicken on Higgins Beach.  Unleashed, no less.  This really got the vigilantes clucking – demanding that the officer on duty check on the ordinance language regarding pet poultry on the beach.  It turns out that biddies and capons have free-range beach privileges under existing law.  We predict an emergency ordinance to deal with this outrage against the decorum and propriety for which Higgins is so well known.

Perhaps we’re getting a bit carried away with all this elephant imagery.  But the new teachers’ contract that is currently being negotiated is really huge.  Some would say ginormous.  Indeed, it is accurate to say that this is the single most important budget decision the School Board ever makes.  And it’s happening now, totally under the radar.

That means for the current fiscal year, $17.2 million of the total operating budget of $45.9 million is governed by this one contract.  And if the about-to-be-finalized contract is for a three-year term like its predecessor, teacher salary and benefit increases will be locked in through fiscal 2019.

And yet we hear barely a peep about this incredibly important financial transaction.

In summary, there is a lot riding on this one contract – 38% of expense increases for the next three years get locked in when the School Board ratifies this contract, perhaps within the next few weeks.  If a 4 or 5% increase gets agreed to now for each of the next three years, nothing can change that at budget time each year.  Yikes!

One of our Favorite Hollow Arguments

The fact that critical budget decisions for the next three years are being made right now and are sheltered from any public scrutiny (by State law) and are led by a former teacher (School Board member Jackie Perry) leads to one of our all-time favorite disingenuous arguments consistently put forth by school administration and the School Board:  At budget time every year, we are solemnly told that all salary and benefit increases are “fixed costs,” i.e., “there’s nothing we can do about them… they are contractual obligations.”

Yes, that may be true at budget time, but remember who negotiated those contracts – school administration and the School Board.  And those salary and benefit costs are most definitely controllable.  But the only opportunity for controlling them is NOW when the contract is being negotiated.  Let’s hope that Ms. Perry is looking out for the taxpayers when she’s negotiating 38% of the school expense budget for the next three years!

One of our main complaints –and come to think of it, there have been quite a few — over the past school budget cycles has been the lack of information provided about the financial impact of the various labor contracts… even after they have been signed and become matters of public record.

Here’s the most recent example: At the June 16, 2016 School Board meeting, Ms. Perry reported on the contract with the school maintenance workers that had been finalized that morning and then approved at the Board meeting later in the day.   The gist of Ms. Perry’s report was that everyone was happy with the contract and that a few relatively minor changes were made from the previous contract.  Not a hint of the financial impact of the new three-year deal.  Nor did any of the Board members inquire as to the financial terms of the contract.  It’s almost like the financial impact doesn’t matter as long as “everyone is happy.”   The trouble is, taxpayers don’t have enough information to know if we are happy or not. 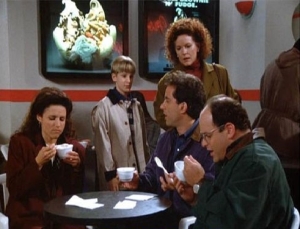 “Non-fat yogurt” and the importance of full disclosure.

We hope that there will be robust disclosure of the financial impact of the teachers’ contract when it is approved at a School Board meeting in the near future.

And not just the cost-of-living adjustment part of the deal.  That’s another tried and true obfuscation from the School Board playbook.  Sure, the cost-of-living increase may “only” be 1.5% or 2%, but school officials tend to conveniently omit the amount of the  “step increase” that every teacher gets in addition to the COLA increase.  For instance, some teachers under the expiring contract received total annual increases of as much as 7.5%.  (For a more detailed discussion of how the teachers’ contract works, see “Song and Dance Time” in the April 20, 2015 blog post.)  Listen very carefully if someone happens to mention the financial terms of the new teachers’ contract.

As taxpayers, let’s hope that our interests are being looked after in the current negotiations with the teachers’ union.  And that the full financial impact of the new contract will be shared with us once it is signed.

We’re hard at work on the next installment of the summer beach report.  It will be hard to top the chicken-at-Higgins item, but we’ll try.  Of course if the teachers’ contract gets signed, we’ll be all over that.  And who knows what other goodies may emerge from Town Hall during the summer doldrums.

Until next time, happy trails!  And stay hydrated!