Well, friends, it didn’t take long to get back into the swing of things after the summer doldrums.  At their October 6 meeting, the School Board approved a new three-year deal with the teachers’ union.  Remember, this contract probably accounts for 40% or more of total school expenses.

The cost information wasn’t disclosed at the meeting.  If the Board members had it, they weren’t sharing it with the public.  But we were promised that cost information will be developed by the Superintendent and presented at the next School Board meeting.   Wait, what… the cost of the contract is going to be developed and shared after the School Board unanimously approved it?  That’s weird; in that old-fashioned world we live in, you find out how much something costs before you agree to buy it.   Did we miss a paradigm shift?

So here are a few of the contract details that were unveiled at the School Board meeting:

Again, no costs were mentioned for any of these items.  Anyone want to hazard a guess as to the amount of increase these measures will mean for the “level services” budget over the next three years?

Also announced at the October 6 School Board meeting were the preliminary financial results for fiscal year 2016, which ended on June 30.  Turns out it was a good year financially… the schools ended the year with a surplus (or fund balance) of $1,960,000.  Revenues were more or less as budgeted, but expenses were favorable by about $2.2 million.

Usually the schools come in with a favorable expense budget variance in the $400,000 to $500,000 range, but this year it was significantly more.  The main reason – our old friend the Wentworth Windfall!  Will it ever go away?

Bottom line… we taxpayers have already ponied up about $2 million of tax revenue which is available to pay for the coming year’s school budget.  So when the Fiscal 2018 discussions start early next year, don’t forget we’ve already got $2 million in the pot.  Perhaps taxpayer funding can be flat for Fiscal 2018 since we’ve already anted up $2 million with the Wentworth Windfall.

Okay, we admit it.  We felt a slight tingle of hopefulness when new superintendent Julie Kukenberger announced the October 1 enrollment numbers at the School Board meeting.  It wasn’t the numbers themselves… it was just the fact that the superintendent was voluntarily informing the public about a key school department statistic.  We hope this was a small inkling of transparencies yet to come.  That would be a most welcome change.

The numbers themselves are fairly unremarkable as the following chart indicates:

So, instead of the growth in enrollment Dr. Entwistle assured us was occurring in Fiscal 2016, we actually lost a handful of students.  Not a big deal from a financial perspective, but it does make us wonder – with the strong housing market Scarborough has experienced in the last year, why is enrollment not increasing at least somewhat?  (And, no, we’re not suggesting that the enrollment projection study done last year be revised and updated.)

Here’s hoping that there will be periodic enrollment updates in the future.  And that the new super will bring a new level of transparency to the school department.

Faithful readers of this blog may recall that the budgeting of the school nutrition program has been a burr under your editor’s saddle for quite some time.  The school lunch program routinely loses more than $200,000 each year.  Yet every year school administration puts forth a budgeted loss of only $25,000 or so.  Every year there is a new, hopeful story – never substantiated by realistic assumptions – of how the program is going to turn around financially.  But it never does.

The just-ended fiscal year was no different: You, dear taxpayer, were told in the budget that the school lunch program was going to require $25,000 of taxpayer funding.  When the books were closed on the year, however, you ended up funding a loss of $237,000.  We sincerely hope this charade will not continue and that the Fiscal 2018 school nutrition budget will provide an honest and realistic assessment of the program’s revenues and expenses.  Now that would be refreshing.

The two members whose terms are expiring are running – unopposed – for re-election.  Nuf said.

There are four candidates for the two seats that are up for grabs.  For our money, Annalee Rosenblatt is a no-brainer for one seat.  Annalee has lived in Scarborough for more than 30 years.  Her record of public service to the Town during that period is unparalleled. She served two terms on the School Board, including one year as Board chair.  In addition, she is a long-time member and past chair of the Kiwanis Club and served as the chair of the Scarborough 350 Committee in 2008.

As a professional labor negotiator, Annalee has business skills which will be a significant asset to the Town, especially at budget time.  She was one of the charter members of SMARTaxes (Scarborough Maine Advocates for Reasonable Taxes).

Annalee is someone we can count on to represent ALL Scarborough taxpayers.  Please take a look at Annalee’s website (click here),  review her extensive qualifications and give her your vote. 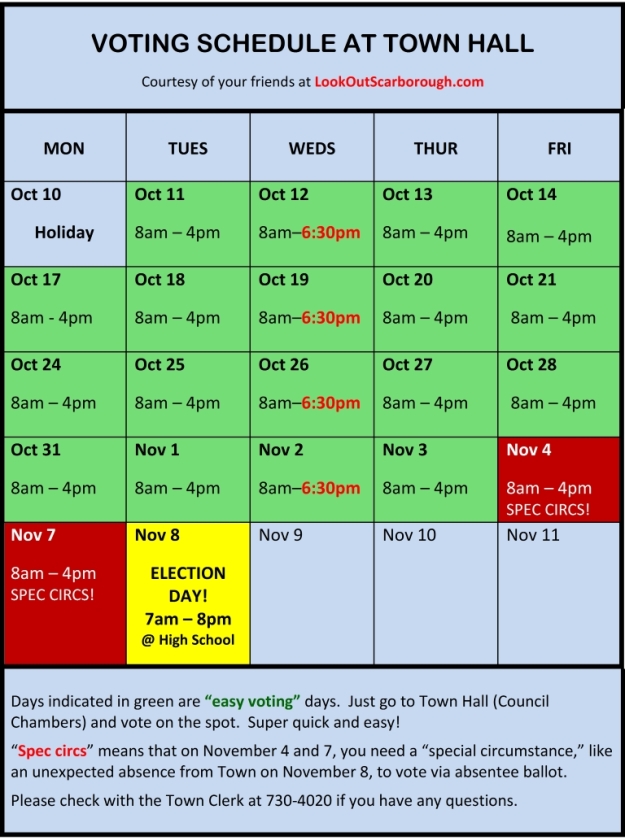 That’s all for now, folks.  More excitement will surely follow.  Breaking news as it happens.

[Please note that the views expressed in this blog are solely those of the author.]

1 thought on “Teachers’ Contract Signed… just send us the bill…”