Well, so much for a nice, relaxing summer in Scarborough! Who knew it would take until September to pass a school budget!  And then, when all was said and done, the final overall tax rate increase was 3.6% — more than the 3.5% and 3.0% increases that went along with the two defeated school budget referendums.  Only in Scarborough!

But, as your grandmother may have said, there’s no rest for the wicked.  Not only is there already great hand-wringing about next year’s school budget, but there are currently two major issues on our municipal plate – the approval of a new $21.5 million police/fire station and the creation of the Town’s “comprehensive plan.”  Both of these will have significant impact on our tax bills – one quite soon and one on a longer-term basis.

First, the new police/fire station.  This is a tough one.  It is abundantly clear that the current building is too small and past its prime.  There’s also no doubt that our police and fire personnel deserve a better facility.  But the tough part is the financial justification of a new building.  No matter how you slice it, there’s going to be a major increase in our tax bills if this building is approved at the November 7 referendum.  Here are some of the key numbers:

That’s right, the Town will have a new mortgage payment of $1.4 million the first year the new building goes into service.  That $1.4 million will go right on top of the other “routine” cost increases we face each year for municipal and school salaries, debt costs, other operating costs and capital equipment.  So prepare yourself for another big tax increase in the near future.

We’re working on our projections of the Fiscal 2019 and 2020 tax increases.  Let’s hope the Town is, too.  But be aware: some of our elected officials are dead-set against doing financial projections… probably because they know just how bad they would look.  The lack of long-term financial discipline inevitably leads to fully predictable “surprises” in budget —– and tax rates.

More on the financial impact of the proposed new public safety building next time.

Some readers may have heard about the comprehensive plan process that the Town has recently embarked on.  Unfortunately, though, many Scarborough residents either haven’t heard…or don’t care.  But this is a process you cannot afford to ignore!

The State of Maine requires communities to prepare a “comprehensive plan” every 12 years.  While it is a zoning document at heart, the “comp plan” sets the Town’s broad general objectives for the next 10-20 years.  Things like, how fast do we want the Town to grow?  Where do we want that growth to occur?  What sort of housing solutions do we want to accommodate population growth – single family homes, condos, small apartment complexes, high-rise apartment buildings?  What will the impacts of growth be on demand for services and facilities?  (How much more crowded do you want Route 1 to be?)  And about a thousand more questions… the ultimate answers to which lead directly back to your tax bill.

The headquarters of our comp plan consultant, TPUDC, in Franklin, TN.

For this planning process to be reflective of the entire Town, it needs broad general input from as many of us as possible.  Unfortunately, that broad general input is not happening. As a result, the comprehensive plan is being crafted by a boutique planning consultant and a very narrow sliver of the Town’s population.

Sure, there’s been all sorts of talk about what an inclusive process this is going to be.  But when you get right down to it, it’s not working out that way.  The way “public input” has been structured, you have to make a determined effort to give input.  First, you have to figure out that your input is wanted. 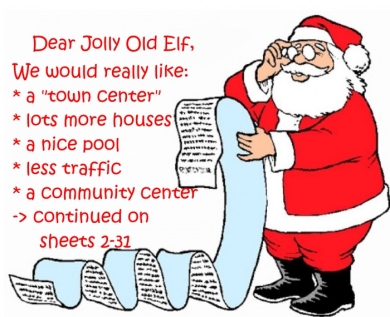 Last month, four neighborhood meetings were held to allow citizens to share their visions of Scarborough in the future.  To a large extent, this was an exercise in compiling a wish list.  And, according to a published report, only a total of about 50 of us grass-roots citizens attended the four meetings.  (At some meetings,  Town officials and employees  seemed to outnumber us garden-variety folks.)  Did people not know about these meetings or did they just not care?

You can still provide input by going to the special comprehensive plan website (www.scarboroughengaged.com).   Once there, you can join the small number of your fellow citizens who have commented on the discussion forums.  (Chances are these are mostly people from that same group of 50-100 who have been “engaged” through the in-person meetings.)   Or you could have spent a day or two at “Planapalooza©” from September 25-28.  Come on now… how many of us are able to devote several hours to this exercise?

From the very beginning, several residents have asked to have the public input process include a survey of all residents.  You know, mail a survey to every household that asks the folks who live here how they envision Scarborough’s future.  Yes, we know, how quaintly 20th century of us!  But let’s make sure that this is really an inclusive process that accurately reflects what the Town as a whole wants, not just the 100 or so people who can figure out what the hell a Planapalooza© is.  Remember, there are nearly 20,000 of us who call Scarborough home… let’s not have 100 people make decisions that will significantly impact all of us.  Also important:  a mailed survey will reach two sizable groups that may not otherwise be well represented – those older residents who are not attuned to email/social media and the many part-year residents who have now returned to their winter homes.

There’s been a whole lot of waffling as to why a hardcopy survey can’t be mailed to all residents.  But the absolute best reason we heard that we couldn’t possibly do an all-households survey was… you’re gonna love this one… it would be too expensive!  The approved budget so far for the comprehensive plan is $135,000 and we can’t fit in a decent public opinion survey?  What are we missing here???

Much more to follow as the initial outline of the comprehensive plan becomes clear.

One of the main reasons many of you apparently read this blog is so that you can have at least some idea of what’s really happening at Town Hall without having to sit through all those mind-numbing meetings. (Of course, the price you pay is that you have to put up with your editor’s often cynical perspective on what transpired.)

But the September 18 meeting of the Joint Town Council/School Board Finance Committee is a good example of the sort of high quality entertainment you might not be aware of if you weren’t a LookOutScarborough reader.  This meeting featured a debriefing of the recently (and belatedly) completed Fiscal 2018 budget process.

We were surprised to hear that several of the participants thought the budget process actually worked quite well.  In fact, the only fly in the ointment according to them was some special interest group that insisted upon widely publicizing a number that didn’t support the party line.  So the 50%, more or less, of voters who are concerned by increasing taxes are now a “special interest group” in addition to being “anti-education.”  And you know who you are.

The other rather startling aspect of this meeting was the obvious reluctance of the committee members (with one exception) to embrace financial planning and forecasting.  Remember, this is a finance committee.  And they’re against financial forecasting.  You know, so you can kind of look ahead to see what financial demands will or may be on the horizon and consider those demands when you’re preparing the current budget.  Most folks would consider that to be common sense.  But once again, Scarborough distinguishes itself – with a finance committee that comes out against financial planning.  [If you find this hard to believe, please review the video at this link.]

Yes, the past few weeks have been chock full of newsworthy developments at Town Hall.  We confess it has been difficult to keep up with them all.  But we’re putting our nose to the proverbial grindstone and planning to have another blog entry within the next ten days or so.

Among the topics we’re feverishly working on:

Phew.  So much going on.  It takes your breath away.