The WEX story so far…

In our last blog we filled you in on the $2.25 million tax break (aka “Credit Enhancement Agreement” or “CEA”) that WEX has sought from the Town.   The Town is being asked to pay WEX $150,000 per year for 15 years for a total of $2,250,000.  Actually, since the developer will be paying the taxes on the property, the Town will probably be cutting a check payable to WEX each year.  So it’s more like rent subsidy payments to WEX that the taxpayers will be making over the next 15 years.

And remember, this proposed rent subsidy payment is in addition to the $80 million tax break the Town gave to “the local boys” last year to develop the Downs property.  Little did we realize that that $80 million was only the beginning… the WEX CEA is just the first of the “extras.”

Not getting the tax break/CEA is NOT a deal breaker

The main argument for giving WEX the $2.25 million tax break is that it if they don’t get it, they don’t come to Town.  They go to SoPo.   In other words: no tax break, no WEX.  While that may have been the case earlier in the negotiations, it is no longer the case.

Here’s why.  In the January 23 Press Herald story, WEX’s head of real estate noted that the tax break was “a potential deal breaker,” not that it was a deal breaker.  Subsequently, it has been reported that the developer of the WEX building (Center Street Partners) has entered into a construction contract with Landry & French to build the $50 million facility.  Here’s the link to that story.

Now for that to happen, the developers had to have agreed to a lease with WEX.  In a case like this, a developer won’t enter into a construction contract without a lease in hand.  And since Scarborough has not authorized the CEA/tax break, that tax break clearly cannot be part of the lease arrangement that WEX has agreed to.  QED.  Scarborough’s granting of the tax break to WEX is not required for WEX to come to Scarborough.  They are coming with or without the tax break.

So if the tax break is not required for WEX to come, why are we still talking about giving them one?  Just to be nice guys?  As a welcome gift?  From the taxpayers of Scarborough to the shareholders of WEX?   So they can “feel the love from the town,” as developer Roccy Risbara put it?  Cut it out!  We can think of many much less costly ways for the Town to show WEX the love!

Here’s a statement from WEX’s website about their relationships with the communities they are in: “At WEX we act as stewards of our communities. We have a long history of giving back, engaging with local organizations, and ensuring sustainability in our philanthropic endeavors.”

But apparently, in Scarborough’s case, their generosity only kicks in after they have shaken down the taxpayers for a rent subsidy.  This is just weird.

One of the least persuasive talking points from the Downs crew is that the $150,000 per year rent subsidy (or $2.25 million in total over 15 years) is just chump change for the Town considering what we’re getting.  Perhaps.  But to us, that $150,000 is still a couple of teachers or emergency responders.  And given the financial challenges the Town will face over the next few years, that $150,000 each year will loom even larger.

(Also, let’s not forget some previous heated debates over much smaller amounts of money, like the great beach raking controversy of 2018 and the inability to pay for the postage to send out revised property cards in connection with the residential revaluation.  Both of those issues involved less than $10,000 but were characterized as budget busters.)

And speaking of big numbers… 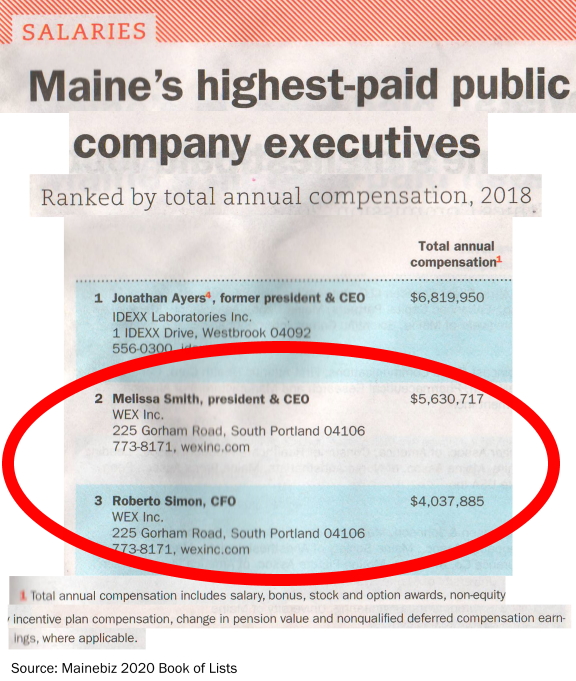 A Greeting  Card for WEX 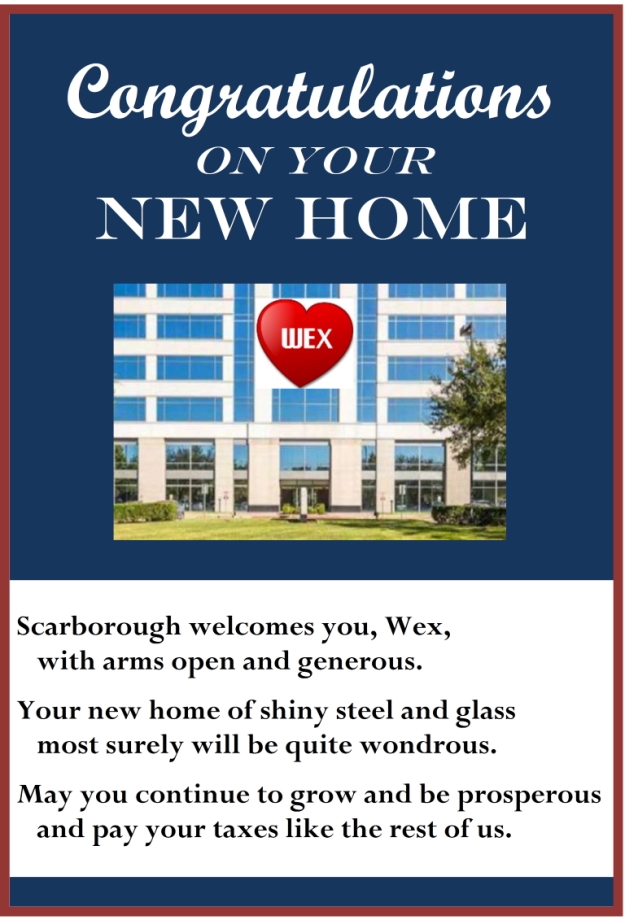 Somehow Scarborough now finds itself in the position of voluntarily providing a $150,000 per year rent subsidy to one of Maine’s most successful companies.  If WEX can’t afford the rent, they should hash it out with the developers/building owners.  The taxpayers of Scarborough should not be involved.  We should not be chipping in even one thin dime to support this corporate welfare scheme!

What’s next on the proposed WEX tax break

The Town Council will be having a public hearing on the tax break for WEX on Wednesday, February 5 at 7:00 pm in the Council chambers.  All members of the public are cordially invited to share their thoughts on giving WEX $2.25 million as an inducement to come to Scarborough.  Remember, you don’t have to be a polished orator to speak; in our experience, the “plain speakers” are often more persuasive to the Council members.

Also, the Town has announced a “Community Round Table” on the WEX CEA to be held at Town Hall on Thursday, February 13, at 6:00pm.  According to the Town newsletter: “There will be a brief presentation to share the what, who, and how of the proposal and then the floor will be open for resident questions and comments.”

Finally, the Town Council’s “second reading” or final action on the proposed tax break is currently scheduled to take place at the Council’s meeting on Wednesday, February 19.

So there are still good opportunities to learn more about and express your opinion on the proposed tax break.

But even if you aren’t the meeting-attending type, please let the Town Council know how you feel about the proposed WEX tax break.  It really is simple and your opinion does matter!  One email address sends the same message to all the Town Council members: towncouncil@scarboroughmaine.org.

If you have read this far, you probably care about the WEX tax break one way or the other.  So please take the 2-3 minutes needed  to send a brief email to the Town Council sharing your opinion right now.   Scarborough is your Town, too!  Share your opinion!  Thank you!

That’s all for now, folks.  Happy trails until we meet again!

(nom de blog of Steve Hanly, who is solely responsible for the blog’s content)