We’re going to start the year off with some fireworks courtesy of Scarborough’s Assessing Department.   Now before your eyes glaze over at the mere mention of the Assessing Department, be assured that this little tale is worth listening to.  In fact, so far it has cost more than $800,000 of our hard-earned tax dollars.  And another million bucks could easily follow them out of our collective tax-paying pockets in the near future.

This all has to do with a fairly complex and messy legal battle, but it’s our job to boil down the complicated stuff and leave you with the essence of it… which may make your hair stand on end.

Here’s the four-sentence summary of the current legal mess:  For many years, Scarborough’s tax assessor would sometimes reduce the assessed value on an empty lot a homeowner had that was adjacent to the lot with his or her home on it.  This practice was not publicized or “official,” but was available if you knew about it.  So if you happened to know about the discount “program” and you asked for it, you might get a nice reduction on the value of that vacant lot you owned next to your main property.  It was particularly valuable to homeowners of shorefront or “water-influenced” property, since getting a 40-70% reduction on the land value of an abutting $1 million undeveloped lot would produce a significant real estate tax savings. 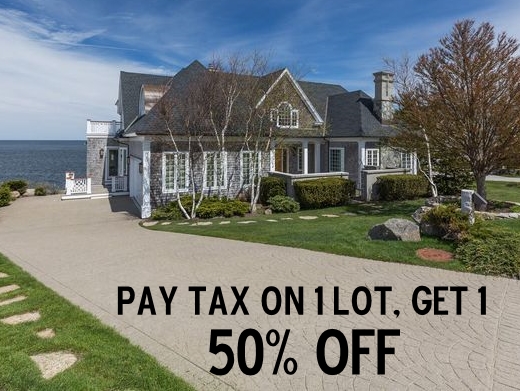 (Note: this offer has expired!)

The trouble with this is… it’s illegal.  State law requires all similar lots be valued similarly.  And applying the discount on a selective basis obviously discriminates against other homeowners who are having their land valued at the appropriate, non-discounted value.

So a bunch of Scarborough property owners realized that they were paying full freight when a select few were getting a bargain rate and challenged the Town’s illegal and discriminatory valuation practice.

We don’t pretend to understand the nuances of the legal wrangling and various court cases that have been swirling around this issue for the past 2-3 years.  But here’s the payoff:  The courts have determined the Town’s discounted lot practice was illegal and the Town has had to refund some of the suing homeowners’ taxes.  Here’s the tab that we taxpayers have picked up so far: 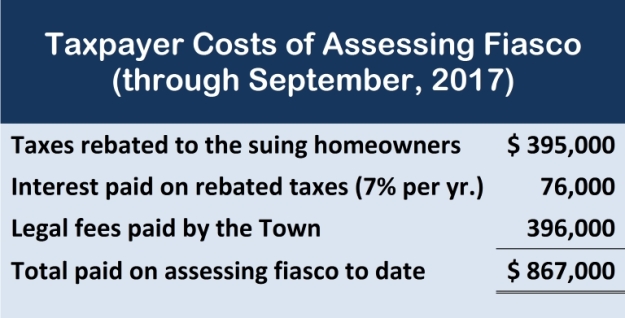 Unfortunately, the above amounts may be only the beginning of the total that Scarborough taxpayers will ultimately pay for this assessing fiasco.  In December, 2017, the court essentially said that the $395,000 awarded to the suing homeowners so far was not appropriate compensation for the discrimination they experienced.  The suing homeowners have suggested that “fair” compensation for the assessment discrimination is another $1.2 million or more (plus interest).  And, of course, the Town’s legal fees continue to mount.  So don’t be surprised when the budget discussion for FY19 includes a substantial amount for a “tax abatement allowance” or similarly innocuously described item.

So that’s the gist of the sad tale.  Of course, there’s much more to it – like how this could possibly happen, who was responsible, was anyone held accountable and what’s being done to prevent similar costly problems going forward?  (You can probably guess the answer to at least one of those questions.)  We’ll get into those matters in a subsequent blog… unless there’s a great outcry of “please, no more assessing stories!”

Pine Point Beachfront Lot – Yours for a Song 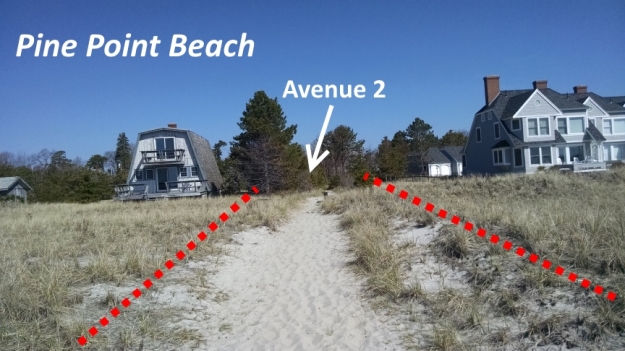 You may recall, back in May, 2017 we reported on the Town’s proposed giveaway of Avenue 2 at Pine Point.  (Here’s the link to that blog.)  This is the one where a developer is claiming he owns half of Avenue 2, which is a “paper street” leading to Pine Point Beach.  Avenue 2 has been used by the public as a path to the beach for generations.  And although public access will still be maintained via a permanent public easement included in this almost-done deal, there’s still reason for public concern, or perhaps even outrage.

First of all, it’s further evidence of the Town’s unwillingness to protect historic public beach access against the lawyered-up acquisitiveness of private interests.  How many bad land deals does the Town need to make at Pine Point before citizens from all parts of the Town stand up and say “enough of this!”? 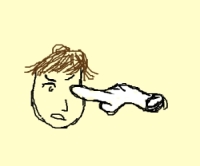 And taxpayers get a more direct poke in the eye on this particular deal…  The Avenue 2 lot the Town will be handing over to the two abutting property owners is beachfront property about 50 feet wide.  At Pine Point, that means its assessed value would be about $ 1 million.  The deal is that the Town will get a permanent easement of the middle 10 feet of the property to allow continued beach access.  Which leaves 20 feet on each side for the two abutting property owners – Mr. Gendron on one side and the Gables Condos on the other.

The only possible silver lining we could see in this deal was that at least there would be some newly taxable beachfront property assigned to each of the abutters.  If 40 feet of the 50 foot Avenue lot were to become taxable, that would be up to $800,000 of newly taxable property for the Town (or about $13,000 of new tax revenue).  But we were increasingly wary of that benefit occurring when the Town Manager repeatedly refused to answer questions about approximately how much newly taxable assessed value would be added as a result of this deal.

Then the bomb was dropped at the Town Council meeting on December 6:  Due to the easements on the property, what is now Avenue 2 would be classified as “wasteland” for tax assessment purposes after the deal is done.  Yes, in Scarborough we have beachfront wasteland.  We still don’t know if there will be any new assessed value on the former Avenue 2, but we have a feeling that if there is, it’s going to be pretty minimal. Yes, “beachfront wasteland” is a hard concept to wrap your head around.  But this is “Scarborough, Maine – a different kind of town”©. 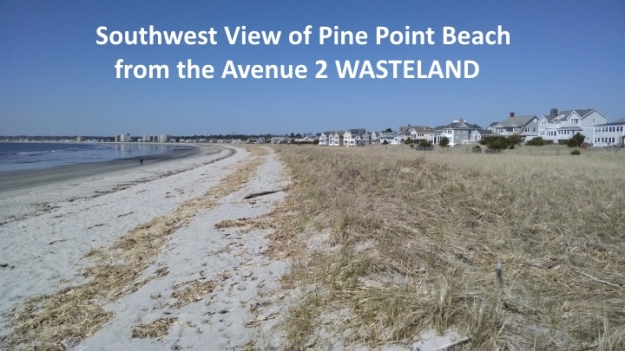 Speaking of the assessment legal mess… isn’t it strange that the Town could come up with the totally unbudgeted $471,000 to pay the first installment of the tax rebates and interest out of some never-discussed slush fund (“the overlay account”) and “fund balance” without batting an eye.

Yes, those minuscule amounts were all presented as budget-busters.  Compared to the recently made unbudgeted tax abatement payments, they were all obviously chump change.  And we, fellow taxpayers, were the chumps.   Let’s not let that happen again. 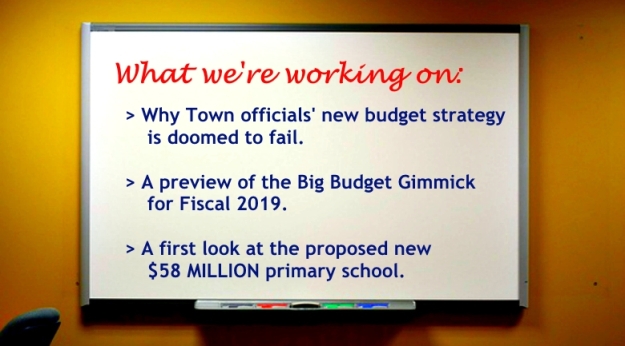 Well, that’s all for now.  Happy trails to you until we meet again!

5 thoughts on “Assessing Scarborough’s Assessing Fiasco… how much will it cost YOU?”