So, it’s all over now except for voting on the school budget on June 13.  Three weeks ago we predicted that taxpayers would be asked to pony up an additional 7.1% for the schools in Fiscal 2018.  Turns out we were a tad optimistic… in their wisdom, the Town Council unanimously approved an increase of $2.9 million or 7.4% of your tax dollars for the schools next year.  These are numbers that you will never hear from town and school officials – probably because they are justifiably afraid that informed voters will reject a 7.4% increase.

Here are the three biggest secrets that town officials don’t want you to find out about before you vote:

When you vote, the ballot will be utterly useless in informing you of what you are voting on.  Here’s what the ballot looks like:

Posted in or near the voting booth will be a (State-required) page of numbers that provides precious little meaningful information on the budget and no information whatsoever on the budget’s tax impact.

But here’s the school budget summary that you really need:

This schedule was prepared by the school department.  You won’t find it anywhere near the voting booth.  We have translated the “education budget net” terminology into plain English: “amount taxpayers will pay for the schools.”

Town and school officials are perfectly content to have voters remain very hazy about what the school budget really means.  They are counting on folks not understanding the tax implications of the school budget.   If this is transparency, we’d hate to see murkiness.

So when you come face-to-face with that generic ballot question on the school budget, remember what it is really asking is: “Do you approve of a 7.4% increase in taxes for the schools (an increase of $2.9 million) that results in an overall tax rate increase of 3.5%?”  If you think a 7.4% increase is too high, vote NO.

Even to get to that big fat 7.4% increase, the budget preparers had to use $2.1 million of surplus funds from prior years (“fund balance”).  This is otherwise known as “dipping into reserves.”  So the proposed school budget uses $2.1 million of cash left over from prior years to offset increasing expenses and decreasing non-tax revenues.  If not for that infusion of cash from “reserves,” we taxpayers would have had to pony up $44.9 million – a whopping 12.7% increase over last year.  And no one has said much about our reserves – like how much they are in total and how long will they last if we keep using $2 million or so each year.

One number you will constantly hear from town and school officials is the $1.4 million reduction in the amount of State education aid we received.  But the use of $2.1 million of reserves covers that reduction… and then some.

Is this any way to prepare a budget?  Is this the way you run your household budget?  If you think this is an inappropriate way to budget, vote NO on the school budget.

In their wisdom, our Town Council – apparently feeling quite generous with our money – decided that giving the schools 7.4% more tax dollars was appropriate.  Perhaps, dear reader, you are not feeling quite so generous.

The school budget referendum is the one and only opportunity that we have each year to directly impact the amount of our taxes.  A NO vote is not anti-school.  A NO vote simply means that you believe a 7.4% increase in taxpayer dollars for the schools (and the resulting overall tax rate increase of 3.5%) is too high.  It means that the Town Council needs to do a better job of looking out for ALL taxpayers.

This is your tax bill you are voting on.   If you think this tax increase is too high, VOTE NO on June 13.

At the beginning of this year’s budget process, the Town Council set the rather wishy-washy goal of a total tax rate increase of “about 3% or less.”  At the time we remember thinking, what does that really mean?  Does a 3.1% increase meet that goal?  How about 3.2%?  It seemed like a rather oddly-stated goal.

But then, about midway through the budget process, it became clear to the budget preparers that getting to an increase even close to 3% would require making some tough decisions.  Which is the absolute last thing they wanted to do.  The only solution – change the goal!  And presto-changeo, the goal became 3.5% or less.  Or, as Councilor Donovan put it at one meeting, “3.49999%.” (We may be off by one “9” there…)

This little episode perfectly illustrates the town’s m.o. when it comes to financial management – avoid the tough decisions at any cost.  Look for gimmicks to avoid dealing with the real issue of underlying costs being more than taxpayers are willing and able to pay.

Beaches in the Budget Crosshairs 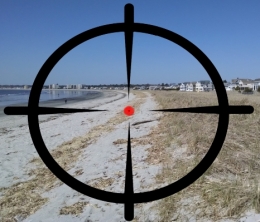 Certainly one of the low points of this year’s budget process came near the end when three nickel-and-dime adjustments to beach-related accounts were proposed at the May 4 Finance Committee meeting and then wrangled over (heatedly, at times) at the May 17 Town Council meeting.

Here are the changes that the Town Council saw fit to impose upon an unaware public in the waning moments of the budget process:

* No more free parking along Bayview Avenue at Higgins Beach.  That parking meter that we were assured was just installed to help enforce the one-hour summertime parking limit will now be a pay meter.  The Finance Committee decided to ignore the numerous voices that were raised in the 2015 brouhaha over Higgins Beach parking and access.  (Seniors are currently eligible for a free beach parking pass.  But the 13 spaces on Bayview Avenue will apparently become the only spaces in town where the senior free beach parking pass will not work.)

*500 fewer hours of seasonal police beach patrols at Higgins Beach.  Should we expect public nudity and urination to return to their former levels?  And will there be adequate policing of parking violations?  Questions that — based on past experience — should have received a thorough policy going-over in an appropriate public forum were instead whisked through by the Finance Committee in one meeting.  Is this the way it’s supposed to work?

* Reduction of beach raking at Pine Point Beach.  Last year the beach raking program was upgraded to include a second beach cleaning every week during July and August to deal with the yuckies that have fouled the beach during the peak season.  With this adjustment, that second cleaning will now happen only every other week.

All three of the above changes were ultimately included in the final budget.  The sum total impact of these adjustments is an improvement of $ 22,000 to the budget.  Talk about a pittance.  Remember, this is a budget that includes using $2.1 million of fund balance (aka “dipping into reserves”) in order to come even close to the 3% tax rate increase target set by the Council.  That Town staff and members of the Town Council were not able to come up with less controversial ways to find $22,000 of budget improvements is a sad commentary on our budget process.

The other highly troubling aspect of this last-minute budget maneuver was the the utter disregard it shows for public involvement in policy decisions.  All three of the policies impacted by the budget changes had been arrived at after significant public comment, discussion and compromise.  Yet those well-considered policies were overturned or significantly degraded with almost no opportunity for public awareness or input.

Tired of a dysfunctional budget process?  Register your disgust with a NO vote on the school budget referendum on June 13.  Yes, we know that beach operations are not part of the school budget, but under the Town’s new “One Town, One Budget” philosophy, everything is fair game.

Here’s our summary of the May 17 Town Council meeting where final approval was given to the budget.  About 10 minutes were devoted to a cursory overview of the municipal and school budgets – during which two critically important elements were not mentioned:   (1) the actual amount of taxes to be raised for the schools ($42.8 million, an increase of 7.4%) and  (2) the use of $2.1 million of reserve funds to keep the increase at “only” 7.4%.  Then there was the obligatory round of back-patting and self-congratulations for a few more minutes.

In our never-ending quest to provide taxpayers with the information they need but can’t get from other sources, we are pleased to share our one-page, condensed budget summary.  It’s a nice supplement to the Town’s 392-page budget opus.  Here’s the link.  If you would like a copy of the budget summary as an Excel or pdf file, just let us know.  We hope you’ll find the budget summary helpful.

Next time, we will be making our annual budget awards.  Among the awards to be made this year:

“The gentleman doth protest too much, methinks” Award

Also, we will update you on the kick-off of the Comprehensive Plan updating process.  This process is critical to shaping what Scarborough will look like five or ten years from now.  If you don’t pay attention, you won’t have a say.

That’s all for now, folks.  Happy trails until we meet again!