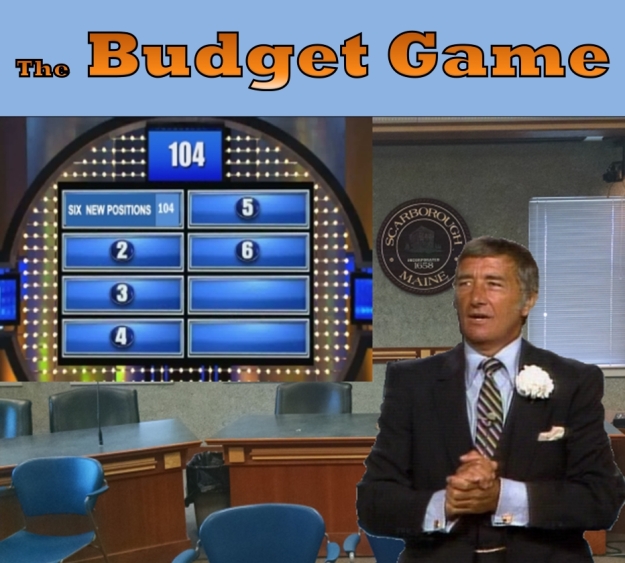 Welcome to another exciting edition of The Budget Game!  Where money is no object, where the devil is lurking in the details, and where taxpayers had better hold on to their wallets for dear life.  On our last show, the School Board hit the jackpot and walked away with a boatload of cash.

Representing municipal operations, it’s our esteemed Town Manager, Tom Hall.  He’ll be going up against the Finance Committee of Messrs Babine, Caiazzo and Hayes —  three guys who know the value of a dollar.  Or do they?  We’ll see right after this break…

Spinning the Wheel at the Finance Committee Meeting

At the Finance Committee meeting on May 11, they spun the wheel and – you’ll never believe it! – the Town’s financial staff was able to “refine” the original budget estimates to come up with an extra $340,000 available in the Fiscal 2017 budget.   “Fantastic!” you say.  “We won’t need to raise taxes quite so much!”  But once again, dear taxpayer, you have leapt to the wrong conclusion…

It turns out that the found $340,000 is just about enough to fund four new positions – an Assistant Town Manager, a Sustainability Coordinator and two firemen.  Coincidence or what?!  Well, actually that was the plan from the beginning.  Until Councilor Hayes raised the issue of the two requested additional police officers…  He thought that public safety concerns were probably more important than a couple of additional administrative people at Town Hall.  And we think he’s right.

Councilors Babine and Caiazzo essentially said, yes, police officers would be nice but we already spent that extra $340k on the Assistant Town Manager, Sustainability Coordinator and two firemen.  When Councilor Hayes persisted, Babine and Caiazzo relented… sort of.  They decided that instead of $340,000 of extra money being “available” from spinning the budget wheel, there was actually $440,000 available!  Another $100,000!  Just like that, they revised the recommendation of Town financial staff and came up with more “extra funds” to pay for the new police positions.  The whole discussion was a thing of beauty.  (It’s on the Town website, but — fair warning — it’s two-plus rather painful hours.)

In our never-ending quest to keep our readers informed, here’s the condensed version of the job responsibilities for the two proposed new administrative positions:

Both positions sound like a collection of vaguely related responsibilities.  And while it was suggested that the Sustainability Coordinator position would pay for itself, it was disconcerting that there was no projection of just how that would be accomplished.  But not to worry… after the person gets hired, they’ll start keeping track of the savings they generate.

Let’s hope there’s enough office space at Town Hall for these two new positions.  Can’t you see next year’s capital request for an addition to Town Hall due to overcrowding?

A related concern is the unquestioning reliance placed on recommendations of staff, i.e., the Town Manager.  On several occasions, this has also been expressed as the Councilors “not wanting to get too deep in the weeds.”  Yes, we agree that Tom Hall is an intelligent and thorough administrator.  But that doesn’t mean his recommendations and judgments should be accepted without question.  Indeed, isn’t one of a Council member’s primary responsibilities to review and pass judgment on the recommendations of Town staff?  And, like it or not, that means getting into the weeds.

In a Pickle over Pickleball

There’s one paragraph in the 407-page budget devoted to the construction of a “senior recreation area” to include walking trails, bocce and pickleball courts, an outdoor chess set and other amenities.  The price tag on this area is a cool $100,000.

Questions about this project popped up on social media… fortunately.  Now we’re all for getting seniors out of the house; we understand they’re spending way too much time on video games and Facebook.  But $100,000???

It turns out that real plans for this project don’t exist.  The $100,000 is merely a “placeholder” for a project yet to be determined.  We understand that the Senior Advisory Committee and Community Services (which would be undertaking the project) have significant disagreements about its scope and location.  Last time we checked, Scarborough was awash in walking trails. And has there been a huge public outcry for bocce courts and outdoor checker/chess sets?  If there has been, we missed it.  Come to think of it, doesn’t this entire single-generation-oriented proposal smack of ageism?

Scarborough has about 5,000 folks who could be considered “seniors.”  If you took a poll of them, what percentage of them would prefer keeping taxes lower by $100,000 compared to spending that amount on an ill-defined project of questionable need?  We believe the overwhelming majority would opt for a lower tax bill.

Our bottom line: Maybe there is a need for senior-focused outdoor recreation opportunities.  But let’s nail down the needs, figure out a realistic cost, get wide public input and then – and only then – include it in a future capital budget.  Especially when it comes to park projects, many citizens are not impressed with the Town’s track record.  To approve a $100,000 “placeholder” is a recipe for a project to go horribly wrong.

The timing of this past Wednesday’s Finance Committee meeting was interesting, to say the least.  Some would even describe it as suspicious.  In any event, it was a very convenient time to “find” $400,000 or so of “unanticipated” revenue and expense reductions… and then spend it.

So six new positions are proposed at the tail end of the budget process, when there’s no chance they’ll be reported in the local press.  And then the new positions will go to the full Town Council on May 18 – with the approval recommendation of the Finance Committee – for the second reading of the budget.  And presto, six positions are added to the Town’s payroll with a minimum of public awareness or fuss.  Ahh, transparency!  (It’s a good thing you read this blog, or you probably wouldn’t know what’s going on with the budget until after it gets approved.)

Due to the pressing topics associated with the FY 2017 budget, we have had to delay our special issue devoted to the goings-on at Scarborough’s beaches… the Avenue Two controversy at Pine Point, the new parking meter at Higgins, the dune “restoration” at Sam Homer Beach (the northern arm of Ferry Beach) and, of course, piping plovers everywhere. Those topics and more as soon as the urgency of the budget passes.

That’s all for now, folks.  Thanks for reading!