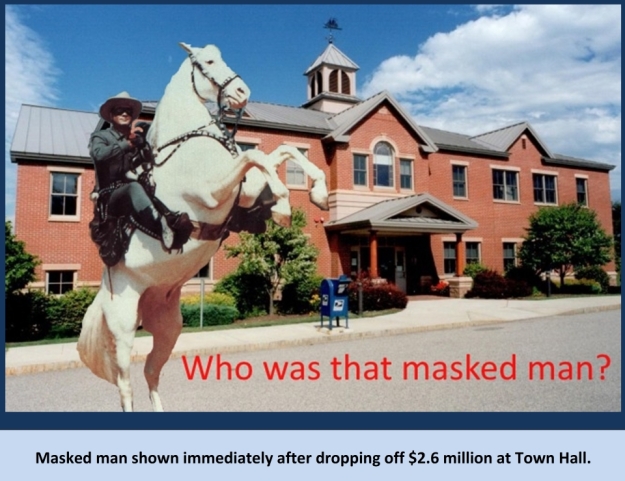 One of the things we like best about the budget season is that you never quite know what will happen next. It’s the thrill of the unknown that keeps things interesting day after day. And this budget season is off to a rousing start in the “are-you-kidding-me?” category…

You recall that our State education funding (“GPA”) for the new budget year has been cut by about $1 million from last year’s level. And the handwriting is on the wall for more State aid cuts in the future. Lots of noise and pitchfork rattling about that.

But then last week Town Manager Tom Hall dropped the bombshell that we have $2.6 million left over from the bonds that were issued for the Wentworth School construction. Yikes! Of course it’s always better to have something left over than to run short, but $2.6 million left over out of about $38 million of bonds? How did that happen? And don’t forget, we’re currently paying interest on those “extra” bonds.

But the really startling news is the planned use of that $2.6 million that we taxpayers originally approved to fund the construction of the new Wentworth. Hold on to your ten-gallon hats, Pardners! The $2.6 million that was approved for capital spending is going to be used to fund school operations both this year and in the Fiscal 2017 budget.  It is, as far as we can tell, perfectly legal from the bond regulations perspective.

On the other hand, the “fortuitous” appearance of $2.6 million may provide a convenient way for school and Town leaders to ignore the realities of the schools’ financial situation, namely, expenses are climbing at a rate well in excess of inflation in an environment of declining enrollment and declining State aid.

And we wonder if the intentions of the voters are being honored here… We approved the bonds to be issued to finance the Wentworth capital project.  And now a portion of the proceeds of those bonds is going to be effectively used to pay school operating costs. Doesn’t seem right to us.

Stay tuned as the saga of the surprise $2.6 million unfolds!

Speaking of the budget…

As we are finalizing this blog, the first hints of the municipal and school budgets have been made public,  Buried in the materials for the April 6 Town Council meeting, you’ll find the “Budget Order for Fiscal Year 2017.”  (It’s at page 23 of the pdf linked here.)  There’s not enough information there to allow any meaningful understanding of the proposed municipal and school budgets — but why would you expect that?

The big reveal will be at this coming Wednesday’s Town Council meeting — April 6 at 7pm.  At that time, presumably the Town Manager and School Superintendent will unveil to all — the public as well as the Council members — the high-level view of the budgets.  And then, after a presentation of a half-hour or so, the Council will be asked to give its “first reading approval” to raising $60 million of taxes.  But don’t worry… it’s only the “first reading” and this is just to get the process started.  And it’s “the way we’ve always done it.” Here’s an  idea: why not release all the details of the proposed budgets before taking any votes at all?  That way, the Council members would have adequate time to review the budget before giving even preliminary approval.

Although we have an inkling, we don’t know for sure what the budget looks like.  But we have a couple of potential headlines for next week’s blog — “Council Turns Over New Leaf!” or “More Budget Smoke and Mirrors!”   Tune in next week to see which it is! 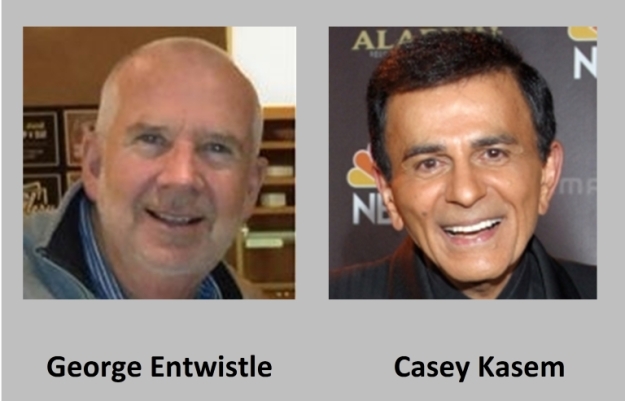 Good old Dr. Entwistle! As his days in the saddle wind down, he decided to leave us a parting gift: a brand new group of school districts to which Scarborough schools should be compared. (In academic-speak, a comparison group is known as a “cohort.” That’s today’s “secret word.”)

So the Superintendent engaged a couple of researchers from USM (presumably using school funds, i.e., our tax dollars) to prepare a study to determine which schools we should compare ourselves to.  Here are the school districts they came up with for our “aspirational cohort”:

“Aspirational.”of course, meaning that these are the school districts which we most want to be like.

So how did the researchers create this cohort? Well, they started by making comparisons of numerous districts in Cumberland and York counties based of school size, community resources and socioeconomic status.  That produced an “overall similarity” score.  Using that similarity score, the top three school districts most like Scarborough were South Portland, RSU 05 (Freeport) and RSU 21 (Kennebunk). So far, so good.

But then they swept all those very meaningful comparisons away and used only one criterion to select the cohort – they only selected districts that had higher academic achievement than Scarborough. So here are the characteristics of Scarborough schools’ proposed new comparison group:

You will note that none of the the top three most similar school districts made the cohort.  By ignoring the relevant characteristics of school size, community resources and socioeconomic status, the researchers created a cohort that ignores those basic realities and results in a comparison group that is very much unlike Scarborough in many important ways: 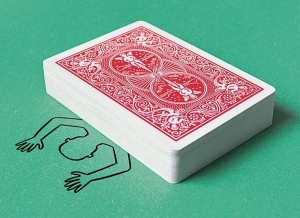 The bottom line of selecting this “aspirational cohort” – every time we get compared to these other districts, Scarborough will appear to be underfunding educational spending. The “aspirational cohort” is clearly a stacked deck. Using this  cohort will provide the School Board with unlimited ammunition in their efforts to extract funds from taxpayers.

The really unfortunate aspect of this is that the non-transparency and manipulation of the selection process probably surprise no one.

Please don’t get us wrong… we want Scarborough’s schools to strive for excellence! Aspiration is a good thing! But aspiration that is not tempered by realism is a recipe for disaster. As that great late-20th century American philosopher Casey Kasem said: “Keep your feet on the ground and keep reaching for the stars!” The proposed new cohort completely ignores the “feet on the ground” part of Kasem’s advice.

Where’d I put that swill bucket?

Back about a year ago, we reported on the “Pay-To-Throw” proposal that would have required us to pay for trash disposal at the cost of a couple bucks a bag. We thought that was a horrible idea. And we weren’t the only ones. Thankfully that idea seems to have been relegated to the Landfill of Ideas Whose Time Hasn’t Come.

But please don’t think we at LookOutScarborough are environmentally unconscious. We ♥ Mother Earth! In fact, until we can afford a Prius for the company car, we’re using one of the retired cows from Smiling Hill Farm to get around on.

Seriously, though… the Town’s Energy Committee recently prepared a very insightful report on the Town’s trash profile and what could be done that would be both financially and environmentally beneficial. It turns out that compostable stuff like food waste, coffee grounds and such (what we used to know as “garbage”) makes up a good chunk of the Town’s trash. There would be some nice savings in disposal fees if we could get that stuff out of the green trash bins every week and into a composting stream.

At this point, the potential savings in trash disposal fees are not enough to justify a separate collection of compostable material. But the Town is taking a good first step by arranging with Garbage to Garden to have three drop-off sites for compostables around Town as of May 1. After that, perhaps one of the private local composting companies will add Scarborough to their collection areas on a subscription basis. That would give those of us who want to cut our waste footprint an opportunity to put our garbage where our mouths are… and not force the entire Town into a composting program.

Ultimately, we hope a giant compost fermentation tank can be installed behind Town Hall to provide a free source of methane for the Tri-Gen system. We’ll be off the grid in no time!

As part of the new school communications strategy, Dr. Entwistle now has a Facebook page. Hooray! Find it at Superintendent Scarborough, Maine. Make sure you like it to keep up on the Super’s daily activities.

So far, it’s been a fascinating view into education in the 21st century. Lots of cool lingo: “learning commons,” “professional learning team facilitator” and “interrater reliability.” Recently we learned that “Marzano iObservation has been selected by Scarborough and a number of other districts as their new Performance Evaluation and Professional Growth system for teachers.” We’re hoping if we keep up with the posts we’ll get some insight into what kids are being taught these days.

That’s it for now.  In anticipation of another rollicking budget season, get plenty of rest and drink lots of fluids!