If this chart doesn’t send shivers up and down your spine, you’re very likely suffering from blank-check-itis, a malady characterized by an unwillingness to ask any questions about the school budget and a complete indifference to the impact that budget has on all Scarborough taxpayers.

Suggested treatment: vote for both Liam Somers and Mike Turek, preferably by this Thursday, October 29, but no later than Tuesday, November 3. Without both of these guys on the Town Council, blank-check-itis will become an epidemic. 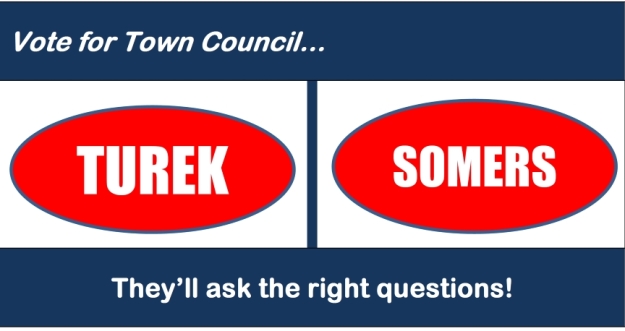 About the “anti-school” candidates…

Some have sought to divide the candidates into pro-school and anti-school camps to serve their political purposes.  But we are still searching for that elusive Scarborough resident who is “anti-school.”  We don’t speak for either Mike Turek or Liam Somers, but we know both are fully supportive of an outstanding school system.  Both seem to realize that the school budget has to be developed within the context of good business practices, transparency and affordability to the entire community.

These are not anti-school goals.  They are common sense goals that we believe a vast majority of Scarborough residents would endorse.

And one final reminder, early voting is quick and easy… but only available this Wednesday (until 6:30pm) and Thursday, October 28 & 29.

Avoid the rush on November 3! 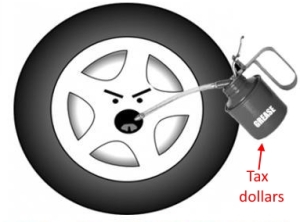 What a difference a few months make! Think back to August when the budget was finally being wrapped up. Do you recall the eleventh hour need to reduce the proposed municipal budget by $180,000 in order to help fund the school budget? Ultimately that resulted in more than $90,000 of reductions to the proposed police and fire department budgets. And yet now – in order to appease a handful of Higgins Beach residents (many of whom are now safely back in their year-round homes in New Jersey or Florida) – the Town can suddenly come up with $18,000 a year for increased parking meter enforcement during the 138-day summer season.

A brief summary of the background of the meter proposal is in The Current [link here].   Do we really need to spend $18,000 every year to prevent a handful of folks from parking for longer than an hour early in the morning and late in the evening? Even if we do, is this such an emergency that it can’t wait to be considered in next year’s budget with other new programs?  Is this really an urgent Town priority?

And speaking of appeasement… There’s another questionable ordinance that certain Council members seem intent on pushing through in a hurry, namely, amendments to the Property Tax Assistance ordinance (Chapter 313-A). Essentially these amendments would change the current property tax relief program offered to taxpayers who are 62 or older. Sounds promising, doesn’t it?

Perhaps the revisions are fantastic and are just what the doctor ordered. On the other hand, so little information has been made available to the public that it’s impossible to understand the implications of the proposed changes. And – once again – from a process point of view, we don’t understand the rush to implement these changes. The proposed changes would have had the second reading and likely approval at the October 21 Council meeting, if that meeting had not been abruptly canceled. It’s only because of that cancellation that the public has a reasonable chance to ask questions about the program. (For a brief newspaper account of the program, see the article in the October 16 issue of The Leader (link here).)

We have a bunch of questions about this program and how it compares to the existing one. But the main unanswered question is “how much is the new program going to cost?” How can the Town Council approve a new program without having a reliable estimate of its cost? That doesn’t seem like a very disciplined or prudent decision-making process to us.

We also have a nagging doubt… is increasing taxes on everybody the best way to address the issue of unaffordable tax rates for one group of folks? What about the other families in town making less than $50,000? Aren’t many of them having as difficult a time making ends meet as those 62 and over? Isn’t the real solution to keep our taxes as low as possible for EVERYONE?

Our hats off to….

Five reasons to vote TODAY (and not wait until November 3):

• Hurricane/snowstorm/other severe weather event on November 3.
• Avoid this on November 4: “Oh, shoot, yesterday was election day!”
• Vote at your convenience and combine it with a trip to Hannaford or Amato’s.
• Last-minute invitation received for all-expense paid trip to Paris; leaving on November 2.
• November 3: bad head cold, car won’t start, pulled muscle in back… just one of those days.

That’s all for now, folks.  Happy Trails until we meet again.

Important note:  The views expressed in this blog are solely those of the writer.  Neither Mr. Somers nor Mr. Turek was consulted about the contents of this blog in advance.