It has been a long six months of school budget discussions and disagreements. Time to put aside those differences and move on. Let the healing begin!

As you will recall in our last thrilling episode, the Town Council had voted unanimously on July 15 to restore $180,000 to the school budget in order to avoid the draconian (and unnecessary) cuts to clubs, activities and sports – all in the name of compromise. But it seems that a bit more compromise was needed, so at their July 22 meeting, the Council added another $70,000 back to the school budget. Phew! This compromise stuff isn’t any fun.

So the upshot of it all – when all the compromising was done – was a school budget that will require an increase in 5.1% of taxpayer funding in FY 2016. Most of the reduction from the proposed 6.8% increase that was overwhelmingly rejected in Referendum #2 was attributable to those evil forces in Augusta restoring $885,000 of State education aid to the Town.

The Council also mandated a further $180,000 reduction to the municipal budget on a “pain sharing” basis. That means the municipal budget will be requiring slightly less taxpayer funding than last year.  The schools require a 5% increase in taxpayer funding, so we take some of it out of the municipal hide.  Go figure. The Town prepares a responsible budget only to have it cut because of the schools.  It can only be a matter of time until we’ll see cut backs in police and fire protection so that the schools can continue spending at the rate to which they have become accustomed.

Oops… we just lost the Kumbaya vibe. And we were trying so hard. Let’s try to get it back.

Loosing the dogs of war

Here’s what our friends at the (non-secret) Save Scarborough Schools group had to say right after the Council’s vote:

Of course, it’s hard to be all nicey-nice and cooperative when the blank-check-for-the-schools brigade has declared war. Nice talk! And to think your humble blogger has been accused of inflammatory rhetoric.

If you watched the blank checkers moaning to the Town Council, you no doubt picked up on one of their talking points – “We are not going away.” Well, you know what, those who are looking for a reasonable balance between excellent schools and taxpayer affordability will be around for the long haul, too. But “war” sets such an uncooperative tone, don’t you think?

By now, you know the voting drill… the easiest and most convenient days will be Wednesday and Thursday, July 29 and 30. After that, you need a “special circumstance” to vote early. Here’s the chart:

The school budget referendum is, unfortunately, one of those very rare opportunities Scarborough voters have to directly influence spending.  The outcome of this vote has a direct impact on your tax bill.  In view of the outlook for future school funding demands, voting in every school budget referendum is an excellent habit to get into.
One very important note – Do not write anything on the ballot! Just mark the oval and hand it in. It will be tempting to add an editorial comment on it, especially since the too high/too low question will not be on the ballot this time. BUT DON’T DO IT!!! If you write anything on the ballot, it will be a spoiled ballot and not counted. (If you still have an urge to make a comment, send it to us here at LookOutScarborough.com. We’ll read it and send you a sympathetic response. Just don’t spoil your ballot.) 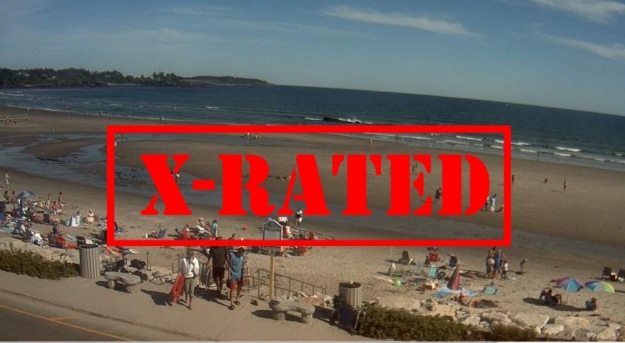 Wait until you hear about the SHOCKING BEHAVIOR and see the SCANDALOUS PIX of what’s going on at Higgins Beach. You won’t believe it! Refined gentlewomen will faint and old sailors will blush. How can this be happening right here in Scarborough!? All the details next time.

As July burns into August and our favorite haunts are overrun with rusticators, one’s thoughts naturally turn to taking it easy after a grueling budget season. If anybody is looking for us in the next couple of weeks, please let them know we plan to be drifting languidly down the Mississippi, stopping only when necessary to replenish our supply of peanuts, chips and beer. Of course, if there’s another referendum or any big resignation news, we’ll go ashore long enough to put out an emergency blog post.

Thanks for all your support over the past several months. That’s made it all worthwhile.

Until next time, be neighborly and happy trails!